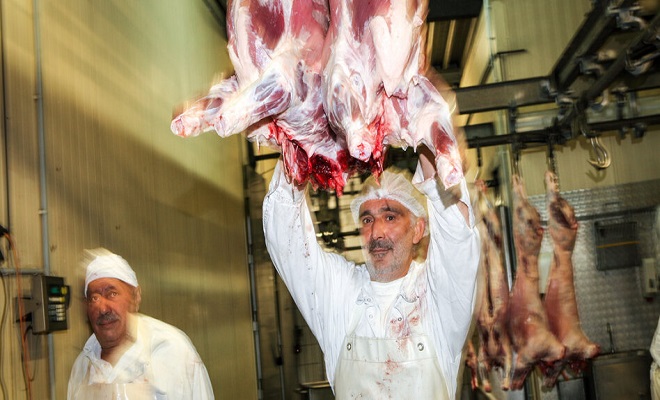 Mostly Muslims come to Rolf Piepmeier’s slaughterhouse near Bremen as they see his meat as halal, even though the animals are stunned

As soon as you enter the shop of slaughterhouse owner Rolf Piepmeier, it becomes clear that he is not hiding anything as everything is visible. Two employees stand at the sales counter and cut meat into small pieces and the skinned bodies hang directly behind the sales counter.

Immediately next to them is the cold room, where the carcasses are kept fresh at three degrees Celsius and customers are waiting for their order in front of the counter and beyond is Piepmeier’s office.

Rolf Piepmeier sits at his desk in a white coat and with a mild smile. What is special about Piepmeier’s slaughterhouse near Bremen is that it mainly has Muslim customers, because almost all of his butchers are devout Muslims, so his customers consider the meat to be halal, that is, allowed, even though it has been stunned beforehand.

In Germany, none-anesthetic slaughtering is prohibited under the Animal Welfare Act, only with some rare exceptions.

Today, lambs and bulls are slaughtered at Piepmeier. There is a paddock in the back yard, where the animals are housed before slaughter. There are still twelve of the four-month-old animals in the paddock, 70 of them arrived early in the morning.

They look curious, but rather shy to people. When they enter the gate, they crowd into the corner, one coughs loudly. “We all do that, maybe it choked,” says veterinarian Holger Klükas who is with Piepmeier five days a week. Four of the lambs are already in a narrow lock and they will slaughtered and die next.

The animals come from Wilhelmshaven, their owner, Jochen Fass, is also there. They all weight around 50 kilograms, in the end about half of which comes out as a meat product. One of the lambs nudges me carefully, I hold out my hand. Tickle his hair and it can be scratched on the head. I am now also interested in the other pairs of eyes. Another lamb sucks on the metal bar, the animal begins to nibble on my fingers.

The veterinarian is not involved in the slaughter

Jochen Fass is a dyke keeper. Nothing protects the dyke like sheep. The lambs were there for four months, now they are dying for human consumption. Veterinary Klükas inspects the animals before slaughtering and assesses the meat afterwards but he is not involved in the slaughter itself, “butchers can do that“.

During the live inspection, he pays attention to the mood of the animals, whether they are stressed or whether they are missing something externally, for example if a lamb is too lean. He also has to examine the waste from the slaughter later: the liver, lungs and other organs as they all must look perfect.

The door to the slaughter room opens, the four butchers are ready. The first animal is urged to open, then the power pads are placed on the head. 230 volts shoot through the young sheep’s body and it slacks onto  the ground.

The animal is stunned and Ali Hiyazi, one of the butchers, pulls the seemingly lifeless body into the slaughter room, with his sharp butcher knife he cuts the esophagus and trachea as well as the jugular veins and carotid arteries in one cut.

Before that he speaks the words “Bismillah, allahu akbar.” which means “In the name of God, God is great.” One of the animals shrugs a lot, but Klükas waves it away and says “These are just nerves and muscle twitches.”

The blood floods the floor and flows into the grating drain and the butchers hang up the animals. Everything happens very quickly, the butchers are professionals as slaughtering is their job. They remove the hooves and head and pull off the skin: they separate them from the meat with powerful knife blows and the next animal is ready and the procedure is repeated.

“I love my job, otherwise I wouldn’t do it anymore, ”says Piepmeier. His job makes him happy. “That’s why everyone can come and watch. When a customer calls and has questions, I say: ‘Just come over!’. He can then see the animal before and after. “But there are no customers involved in the slaughter”, he adds.

However, Rolf Piepmeier himself no longer puts his hand on the knife, otherwise the meat would no longer be halal for some Muslims. Ahmed Ismail, a long-time Piepmeier customer who has come into the sales room, says that it is important to him that a devout Muslim slaughtered the animal and according to his understanding of faith, he shouldn’t eat it from a German, then it would be haram.

Some Muslims even reject anesthesia before slaughter because they believe that the animal was already dead by then. Butcher Ali Hiyazi explains that it depends on the previous prayer whether the meat of an animal slaughtered under anesthetic is allowed or not. Muslims are not a self-contained religious community, there are different interpretations, just as there are differences in Christianity.

There is a friendly but depressed atmosphere in the break room. Every now and then customers just come in, someone brings cake from his wife. The workers smoke here between slaughtering and Klükas brews a coffee. The only women are the customers and a sheep owner. The men are silent, a job like that has to be mentally stressful and one says “I can’t do that with goats, they always scream like that.”

On the wall behind them is a list of 40 cattle breeds from around the world and the other walls are littered with Piepmeier’s certificates: the 60th anniversary of his slaughterhouse, his master’s certificate is hanging there and countless newspaper articles in which Piepmeier mostly gets away well.

This is how his business model came about, says Piepmeier. “I had a lot of Turkish customers.” Then he went to their numerous weddings and made himself known and there someone finally agreed to slaughter for him. Halal slaughter has been carried out in the Piepmeier slaughterhouse since 1964. He found his niche in which he could survive. Piepmeier also says: “That was not out of profit interest. I enjoy my work. “

He sees himself as an “underdog” to the big slaughterhouses like Tönnies, who set the price. “I’m the only quality slaughterer in the area,” says Piepmeier and in his area, he would only be called the “Turkish butcher” but it doesn’t bother him.

His customer Ahmed Ismail also buys lamb on some days, but today he wants 40 kilograms of bull. The animals have just arrived, there are five heavyweights, each weighing almost 500 kilograms. They are about 19 months old and do not want to get out of the truck as if they felt that something bad was going to happen to them.

They are excited, finally two of them dash down into the lock. They run straight into the slaughter room, the other three are still in the transporter. Their owner makes noise and sprinkles them with water, finally they all push each other into the narrow lock. Relaxed looks different, but Klükas says: “This is normal, nothing unusual.”

The first colossus wants to go straight on, but a butcher slams his head away and closes the hatch. In the slaughter room, the animals first come into a box, which they fix while standing. The bolt shot is placed there to stun the animal. The metal rod drills through the skull to the brain.

The pit door opens and the animal falls to the ground, lands on its back and tilts to the side. Then it is pulled up on a hind leg.

Nevertheless, the bull is still alive at this moment, it may only take a few seconds until the throat is cut. The air steams from the warm body, the blood runs down the drain and the sweet smell spreads. “The meat has to bleed out completely, otherwise it won’t keep long and fresh,” explains Klükas.

What happens at Rolf Piepmeier’s slaughterhouse does not seem so different from what happens in other slaughterhouses. There are only small differences like saying a prayer and of course the fact that only Muslims kill the animal but what looks like little makes the meat edible by a large number of consumers.

An exception to the shafting would be “unthinkable” for Piepmeier. That is cruelty to animals, he says, and his customers also consider the meat to be pure/halal.

Would the animals suffer more from anesthetic slaughter? The veterinarian thinks for a moment. “I can’t say that, I don’t know,” says Holger Klükas.