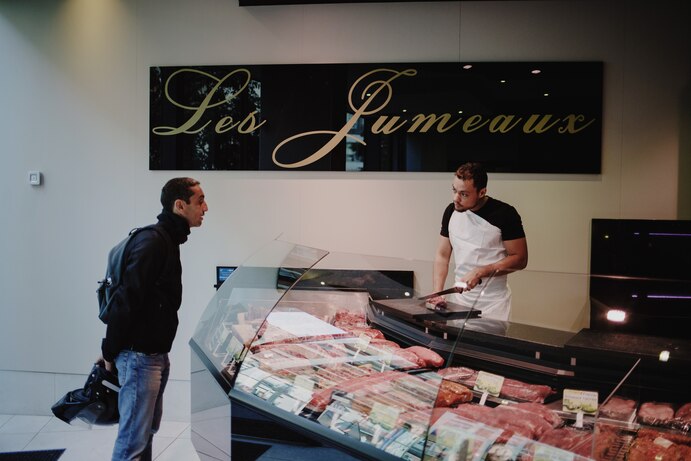 With the “Iftarlender” – named after the Islamic dinner Iftar during Ramadan, which begins in a week – children (and surely also some nibbling adults) can get a little closer to the festival of breaking fast at the end of May every day. The Frankfurt company Honeyletter has the “Ramadan Countdown Calendar” in its program and filled with date and chocolates are hidden behind the 30 doors and covered in fine Belgian Halal chocolate.

The manufacturers understand it as a “sign of cultural symbiosis”. The “Iftar Calendar” is only one of an increasing number of food products that are allowed according to Islamic regulations (“halal”) and the industry has developed significantly in recent years.

It is a mature market that is no longer limited to examples from the grocery store or exclusively to Muslim consumers and it’s a global business that’s about competition between national certification authorities and their standards with billions in global sales.

Germany’s first halal trade fair was planned in Hanover in March but the show was postponed because of the Corona crisis. The range of around 60 exhibitors already shows the range of products and Christoph Schöllhammer was the source of ideas at Deutsche Messe AG. The head of “Halal Hannover” lived in Turkey and became a lover of the local cuisine. “At that time there was no halal corner in the supermarket,” he says.

Kosher is also on the rise

Some people who do not explicitly refer to religious reasons now eat and live halally. “It is not just limited to a clientele that feeds on Islam,” says fair board member Andreas Gruchow. Of course, Muslims were the most important customer group and they set many of the new trends, “but it’s generally about consciously eating people.”

Tilman Brunner, Head of International Affairs at the IHK Hannover, sees it similarly: “It is a seal of quality.” There has been a “Halal & Koscher” working group since 2011 and today there are 120 companies actively involved. “Many also manufacture kosher products because the requirements are often similar.” Estimating sales is difficult because the market is not so easy to define. But when it comes to halal interest, there is generally “a steep learning curve,” says Gruchow. According to Messe AG, the market potential in Germany is five billion euros per year.

The “Iftarlender” stands for a whole range of sweets beat is also known for halal standards, whereby – in addition to the ban on pork – certain slaughter regulations must be observed. A subsidiary of Bifi wants to show certified Halal beef sausages in Hanover. Many know the Sucuk garlic sausage as it is partly about the entire value chain, Brunner explains: “If I want to produce a halal frozen pizza, I have to have the right cheese, the right spices and more.” The range of food supplements and drinks is also growing. This is how a halal energy drink comes in transparent cans – this should symbolize maximum transparency about the ingredients.

No alcohol may be used, neither as an ingredient nor in production. Water-soluble nail polishes are also compatible with the woman’s prayer wash, because such complete contact with the water is possible, as the theologian Asmaa El Maaroufi from the University of Münster explains. “This will also become an issue with cleaning agents,” says Brunner. “Everything I come into contact with can be halal-relevant.”

Vacation as a time for contemplation

Animal testing is taboo when developing products. Halal processes are still in the early stages in the pharmaceutical industry. There, many consumers see the rules according to El Maaroufi rather relaxed: “It is often permitted what is medically necessary.”

Halal-compliant holidays also appeal to a number of non-Muslims. It is about seeing the vacation as a time of inner contemplation, mindfulness and unity with the family. Organizers have special offers for parents and children as well as the classic pilgrimage. According to El Maaroufi, Muslims usually book themselves in order to be able to continue their everyday life carefree even on vacation.

Financial service providers based on Islamic rules are increasingly gaining a foothold in Germany and throughout the European Union. In banking transactions, they must take into account the ban on interest rates, as well as the ban on speculation and the exclusion, for example, of gaming or weapons groups from investment funds. However, some doctrines differentiate between debit and credit interest, for example.

Despite some almost universally recognized regulations, different countries and legal opinions have different ideas about what exactly is halal. Originally it was about actions, not products, explains El Maaroufi. “The term has since opened up very widely,” she says and “You can see that in various certifications of halal meat.”

Many providers also export abroad and German meat giants like Tönnies and Wiesenhof or the flavor manufacturer Symrise have halal products. “Three quarters of our members export,” says Brunner ,”and the exchange is important.” A country like Indonesia could have different rules than one like the United Arab Emirates. “It’s also about market power.” Some states could use standards as a barrier to keep global market competition out, but the chances are great, says Gruchow: “India and Malaysia are also billion-dollar markets.”

Kosher is the new organic

But not only Halal is gaining popularity and kosher diet is becoming increasingly popular too. According to the German Agricultural Society (DLG), dishes containing meat (Hebrew: basari) are separated from those containing milk (Hebrew: chalawi) in Jewish cuisine. Neutral foods (Hebrew: parve), i.e. those that contain neither meat nor milk, may be consumed both with dairy dishes and with meat dishes.

In the United States in particular, kosher food offers an alternative to traditional diets. It sets a counterpoint to factory farming and fast food. In addition, the kosher kitchen is balanced and fresh and in Germany, all of this almost exclusively covers the organic sector.
Related Topics:featuredHalal-Germany
Up Next